My Rite of Passage occurred at Mulford Street. 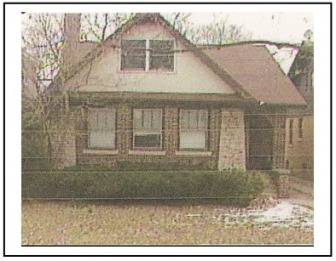 Not long after Joan was born, we moved from the apartment in Rogers Park to south Evanston to a house on Mulford Street. This was before I was 12 when we moved to McHenry. I don’t remember the exact date but I know Joan was still in a large crib in a downstairs bedroom.  Mother and Dad had another bedroom across the hall with a bathroom in between.  Mother’s baby grand piano was of course in the living room which had a fireplace.  Jane and Mitzi shared a bedroom upstairs with very special furniture, and I remember I had the other bedroom by myself with an ugly iron bed.  From my bedroom we could get into the attic.  I tell you all this because each room has to do with my story.
I wasn’t aware that there were people who had a different skin color until we had a Negro maid, as my mother called her.  All I remember is I had to help her dry the dishes.  I guess this was part of Mother’s teaching, but to this day I hate to wash and dry dishes and bless the dishwasher.
One day I decided to run away.  I don’t remember whether I had an argument with Mother or whether it was because Jane and Mitzi always played together without me.  After all, they were the ones together with the beautiful furniture and I was the one alone with an ugly iron bed!  Anyway, I packed a small white round play case and was on my way out the door when Mother caught me.  She didn’t punish me, but Dad did when he got home.  No matter that they didn’t ask me why I was leaving.
And that reminds me -- Dad was always the disciplinarian.  Mother always would threaten “wait till your father gets home” so I lived in fear of what he would say when I did something wrong.   One time Mother listened to me and the girl across the street talking about all the things girls wonder about – boys’ anatomy, etc. because when Dad came home, I sure got it.  I don’t remember why they made such a fuss.  I was only curious about boys because I didn’t have any brothers.  I had no idea how they were different!
I remember my introduction to parents doing you-know-what came one time when I walked into their bedroom without knocking.  I thought Dad would disown me.  He had a terrible temper.  That was when I latched on to how babies were made.
But the girl things were up to Mother and since she didn’t have any sisters, she wasn’t very explicit.  I was always told there would be a “change.”  I didn’t have any idea what she was talking about until one day she appeared at my school and took me to the girls’ bathroom.  I thought I had cut myself and she had found my pajamas.  It was then I realized – the change was my introduction to puberty.
The Mulford house was another introduction – to death.  One day Mother said we had to pay our respects to a neighbor that died.  In my day, the body was laid out in the house, so when Mother took me to pay my respects I had to look in the coffin.  There she was, a dead body in a coffin.  I was scared to death.
Since I was the oldest, I was the one Mother experimented with musically.  Of course I had piano lessons but one of my additions to lessons was the Dalcroze system of interpretation of music for which we had to go downtown to the “Loop” in Chicago.  Mother was too busy one day to take me so she sent me alone on Chicago’s “El.”  I got a migraine while on the train and I had to get off.  But I had just enough money to get back home so I walked all the way, following the train through all the neighborhoods until I got downtown for the lesson.  I knew Mother would kill me if I didn’t go to the lesson.  I can’t remember if I ever told her what I had done, but to this day I have recurring nightmares about getting lost in a bad neighborhood of Chicago. 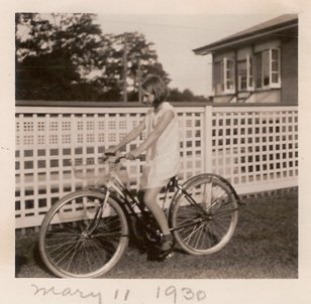 With all due respect to Mother, she knew I was acquainted with using the El because she used to let me go alone to the movies on Howard St., and I had to take the same train to get there.  I would pester her until she gave me the five cents I think it cost then.  That’s when I became a staunch movie fan and knew all the stars by name.  Of course, I didn’t go to the scary movies or the cowboy movies.  My absolute favorites were Jeanette MacDonald and Nelson Eddy, and I think I saw every movie they ever made together over the years.  In the lobby of the theater they were showing the beginnings of TV too.  I remember watching the demonstrations.  I loved the movies. That was my Saturday treat.
So you see, as I said, Mulford Street was my Rite of Passage.