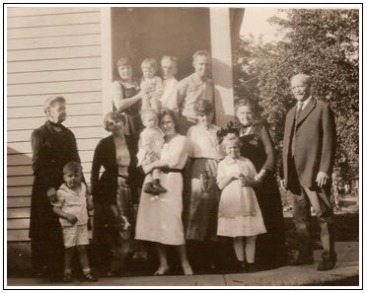 I found another picture which is almost the same as the one in a former blog.  I time this picture as 1921 because it looks like mother (holding me) could be pregnant with Jane and the back of the picture says it was a celebration of Grandma’s birthday, which makes it August 15.  Grandma is next to Grandpa.
The other family picture is almost in the same time frame but I was struck by the differences in the women’s clothing.  In the original picture I published, the dresses were shorter so I think this is an earlier one.  In this one, I was surprised to see that Aunt Helen’s dress was still ankle length, the same as Aunt Jo’s and Aunt Edna’s (which is what we called Aunt Jo’s daughter-in-law), but dear Aunt Florence was the modern one.  Her dress was calf length. 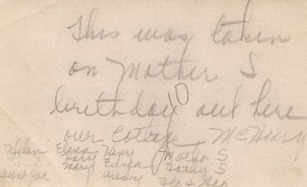 What is confusing to me is the notation “This was taken on Mother S. birthday out here our cottage McHenry.”  I have no idea whose cottage it was.  The deed to Riverside Drive is dated 10 November 1922.  However, Jane’s address on her birth certificate is 4440 Hermitage, Chicago, which was Grandpa’s house, and it says that she was born at Ravenswood Hospital February 2, 1922.  So who was living in the cottage in McHenry in August 1921?  I don’t ever remember Mother mentioning living in a cottage in McHenry although I have never known why Grandma and Grandpa decided to retire in McHenry when they sold the house on Hermitage in Chicago in 1922 after Jane was born.
By the way the older child is Audrey, Aunt Helen and Uncle Leo’s daughter, born in 1912.  I’ve already mentioned Aunt Edna, who was married to Aunt Jo’s son Charles Heimer who died in 1934.  That story was covered in a past newsletter.
I’m adding this picture because it includes three more members of the family and me who were not in the other picture, and the mystery of the cottage.