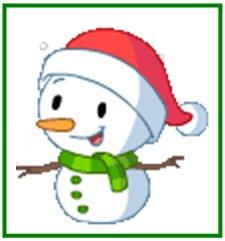 When I was reading Pennington’s book I was struck by her definition of the name Schuenemann, “a wonderful man,” in reference to Captain Hermann Schuenemann of the Christmas Tree Ship.  I had received another definition from Marcella Schueneman, our cousin in Waukegan, who said it meant “beautiful man.”  I thought I better get to the bottom of it so I consulted my good friend Ulrich Holscher in Germany, the one who wrote an introduction in the Schueneman and Greitenevert book.
Ulrich said he consulted the German Google and translated what he found.  I condensed it somewhat to give you the authentic meaning of the name Schueneman historically. By the way that’s a German snowman.
According to German Google, Schuenemann is compared to Schurmann which is from the Middle Low German words, “barn based on,” common in Westphalia.  Our family of Schuenemanns did come from Westphalia.  Quoting directly, “in the area north and east of Westphalia the synonymous word used Schue, which in the standard language of today has become “man of the barn.”
The article went on to say that as an official name it could mean supervisor and manager of the manor barn as opposed to other peasants, and therefore was an official title.
Therefore historically Schuenemann didn’t originally mean “a wonderful man” or a handsome man but remains an official who was in charge of a barn. As far as our first Schuenemann in the U.S. is concerned, Johann Heinrich was very successful as a farmer, “manager of the manor barn,” so he was following the ancient meaning of his name.  He did keep the double “n” but again, quoting Marcella, his children decided to just use one “n” and obviously our family decided to do so also so all our records with one “n” are in the second generation in the United States.. Thanks to Ulrich we have the definitive German meaning of our name SCHUENEMANN.