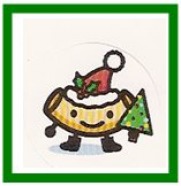 One Christmas I remember vividly.  It may have been our first Christmas in McHenry on Riverside Drive but if not, certainly it was one in that house.   I don’t remember when I stopped believing in Santa Claus but of course I was the oldest of four so I’m sure Mitzi and Joan believed, and maybe Jane was still a believer.
Dad would not put up our tree until we were all in bed on Christmas Eve so we all had to go upstairs to bed early.  I’m sure this practice was one from his childhood.  Putting up the tree was all very secret.  In order to keep the house warm there were drapes separating the living room from the other areas so all I remember is hearing all the commotion going on in the living room before I went to sleep, but Joan remembers sneaking down the stairway in the middle of the night.  There was a slit in the drapes and she saw something red.  Santa was there!  She was afraid of being caught so she scooted back to her bed.
Joan also reminded me that we all had to get up very early to go to 5:30 mass before we could see the tree and our presents.  This was one of the times that Dad went to church with us.  He was not Catholic but on holidays we went as a family.  No one dared to peek inside the curtains until after mass AND breakfast.  I remember the honey buns, the streusel cake, and the blaus kuchen all made by Grandma.  I’m sure we ate as fast as we could.

All Mitzi remembers is that Jane got the doll she wanted. (A doll with a curly hair wig that she kept even as an adult.)  Joan had seen a beautiful train with a track and it went around and around.  She had asked Santa for a train just like it.  And guess what; she did get a train, but a wind-up one!
There were lots of games, and one year Joan remembers we got an archery set. One vivid memory I have is of Dad sitting on the couch crying.  Mother and Grandma ignored him but I wondered; we were all so happy, why wasn’t he?  Now I understand. All his brothers and parents were gone and all he could see was our togetherness as a family: Grandma, Mother, and the four of us having a wonderful time on this special day.  It probably brought back many memories of his childhood and that was why he was so sad.
Christmas was always one of the happiest times of our childhood.  The anticipation of the tree and presents made it so special and we were not disappointed. We all remember Grandma singing 'O Tannenbaum, O Tannenbaum' in German ('O Christmas Tree, O Christmas Tree').  I remembered the German words for years whenever I heard the song sung in English.  It was a wonderful tradition she left with us.  After the big day, the tree was left up until after New Year’s Day.  Then we all had a chance to dismantle it.  This too we looked forward to.  It was fun seeing the decorations up close and straightening out the tinsel for another year to come.