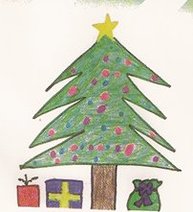 Christmas could not pass without some mention of the legend of the Christmas Tree Ship and its captain, Herman Schuenemann.  Every year in my newsletter I have managed to tell my readers something new about this legend, and this year I just didn’t know what I could add to the story.  Then I received the American Profile magazine in San Marcos, Texas and, lo and behold, there was the feature story about the Christmas Tree Ship and I knew I had my story for my readers.  (Incidentally, this tree on the left is courtesy of St. Jude Children’s Research Hospital.)  I’m borrowing information from the American Profile story written by Vicki Cox, and the photos are by David Mudd.  She writes about how every year at Christmastime, the Mackinaw shows up at Navy Pier in Chicago with 1500 Christmas trees that will be distributed to disadvantaged families.
The U.S. Coast Guard is carrying on the tradition that started with the Schuenemann brothers and later only Herman because his brother August decided not to continue.  Herman soon began to be known as the Christmas Tree Santa and Captain Santa.

However, Chicago’s Marine Committee now has a different purpose - one that Herman would certainly approve of.  They now have a 2000-member all volunteer organization and the trees are distributed to needy families.  The pictures above show the Mackinaw docking in Chicago with all the trees that will go to needy families.
Scouts, high school students, and the crew members string 8,000 lights to decorate the ship each year.  The trees are then unloaded and trucked to 16 charities and churches throughout Chicago.  Many volunteers participate, and numerous books and activities perpetuate the legend of the Christmas Tree Ship and Christmas Santa.