It’s been 10 years since I wrote about kinship in “Messages.”  Since my seventh great-grandchild was just born May 24, I thought of all the other generations that have been born and will be born in the future, and I thought it might be time to repeat a little about kinship and how it works.  All my research involves the parents of my sisters and me.  It does not include my husband or the husbands of my sisters.  That kinship is just as important and can be applied to what I write.
This “Message” is an adjunct to the August 2010 “Message” titled Relationship Chart and I have added another chart to figure out all the cousins to cousins being born.
By birth we belong to a “family of Orientation:” the family of our parents and their relatives.  We are who we are because of the physical and emotional characteristics such as disposition, eye color, body structure, and facial features.  We inherit the genes for generations and that’s why we sometimes have to look backwards when someone looks and acts so differently.
Now, to explain the term “REMOVED.”  If your first cousin has a child, that child becomes your first cousin once removed.  Simply put, removed means that a person belongs to a different kinship generation.   Each new generation will continue to be another step removed from the first original first cousin.  In kinship this is called linguistic shorthand.
However, cousins of the first cousins removed , that is the next generation, are second cousins, but they remain first cousins once removed and their offspring are third cousins but second once removed – and on and on.  Print it out with names.
So everyone who is connected by blood is our family of Orientation.  They are kin and part of us, and from them we learn who we are and where we came from.  It’s all in the genes. The mission of Know Your Roots. 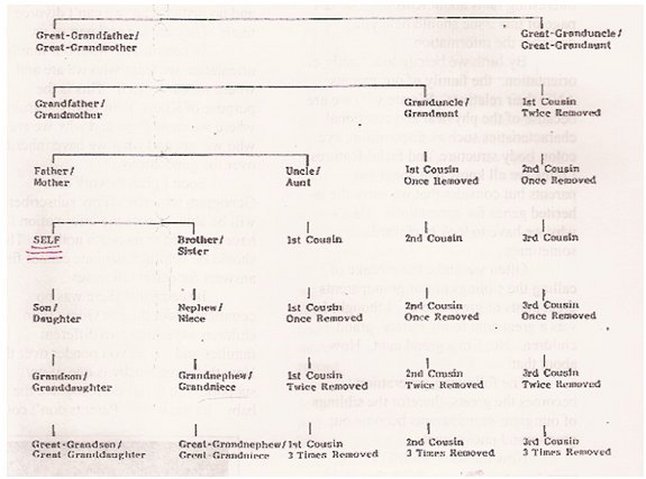