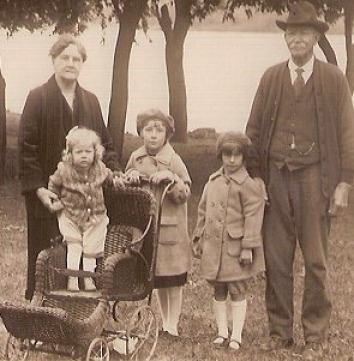 I’m sitting in Grandpa’s chair watching TV, the very same chair with the dog heads at the end of the arms, which he sat in listening to his crystal radio set.  Except it is much changed.  When Grandpa had it in his house it was upholstered in black with a high back.  I’m quite sure it was called a Morris chair.  However, when Grandma gave it to me, I did the unthinkable.  I cut the back down and reupholstered it.
Other memories started to return, like the last time we visited Grandpa before he died in 1928.  I resurrected this picture for surely it was the last time we saw him.  He died just two days before my ninth birthday in September.  Jane was six, and Mitzi only two because her birthday is in October and this picture must have been taken in early spring.
Grandpa had sold his house in Chicago in 1922 right after Jane was born and then bought a house in the country.  Mother and Dad had lived with them after they were married because Dad was conscripted into WWI.  When he was discharged, they stayed with Grandpa and Grandma until after Jane was born in 1922.  Then Grandpa bought the house in McHenry, which had a lot across the street facing the Fox River.  This was where this picture was taken.
I can remember the chickens Grandma had in the back of the house and I wonder to this day which one of them killed a chicken for dinner.  Grandma had never lived on a farm, and Grandpa only until he grew up and then moved to Chicago where he had cousins.  He never wanted to be a farmer; the 1920 census said he was a carpenter.
Grandma cooked on a wood stove in her kitchen.  How she kept the temperature steady when she baked bread was an enigma -- and her bread was delicious.  And there was a pump from a well in the kitchen.  Even when the house was remodeled for us, she kept the pump outside so we always had good water.
When people talk of horse and buggy days, I think of Mr. Kelter.  He lived two doors down the street and would go past the house with his horse and buggy.  Since I was a city girl this was a revelation to me.  I had never seen a horse and buggy ever!
I was told Grandpa liked his beer and so he would walk two blocks down the street with his bucket to get his beer.  Grandma did give me his tall beer steins but I think they were mostly for show.  My son still has them; they’re about a foot high each.
I don’t remember much about Grandpa.  He was a tall man of six feet.  I think he had blue eyes but I‘m not sure.  Grandma did.  I know he spoke German with Grandma even though he was born in Chicago in 1850.  He spoke a dialect called low German but Grandma spoke high German.  I wish I could remember more about him.