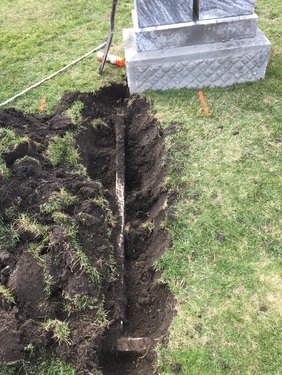 Many months ago Jerry and I went to look for the burial sites of the mother of Johann Heinrich Schuenemann and his child, who were both listed as being interred in the St. John's Cemetery in Johnsburg along with Johann and his wife Maria Catherine Greitenevert.  I knew Johann's mother and child were there because both were in the records of the church but I could never find their graves.  Hoping that they were covered over in the very large plot designated to Johann Heinrich, I enlisted Jerry’s help.  However this was during winter and he could not poke the ground while it was frozen, but he did receive permission to come back in the spring and try then.
So Jerry did go to the cemetery this past spring and he told me about it at the family gathering at Easter.  First he had to get permission again because the original curator had died.  This done, he began to probe the lot of Johann with a stick he had made for this purpose, to see if he could locate a hidden headstone just below the surface of the grass.  While he was working, the cemetery custodian saw him and came over to offer help.  The custodian had already been told what Jerry was going to do and that he had permission to work on the lot.
The custodian then brought over his grave-digging tools and helped Jerry continue to try to locate additional graves.  They probed everywhere on the large lot surrounding Johann's and Maria Catherine's graves, but nothing was found.  The custodian said that wasn’t unusual because Jerry was looking for something that would have been buried in l866 and 1861.  Even though they were looking for granite identification, time would have destroyed the names on them, and certainly the wood caskets containing the individuals would have disintegrated completely and only the bones would remain.  Nevertheless they continued looking around the large plot hoping to find some indication of old burials but to no avail.
Then a surprise.  Jerry did find something directly in front of Johann's and Maria Catherine's headstones.  Outlining their two graves, and about six inches underground, was a short granite wall, called a coping, which is an accessory to headstone monuments that protect the gravesites.  With it being completely underground, they only uncovered part of it because, although they surmised it would have surrounded the two graves entirely, the custodian said he didn’t have the funds to completely recover the entire coping, raise the coping above the ground, plant grass (or add gravel) inside the coping walls, and restore the site with the coping exposed.
Jerry and I talked about it and we decided that we had done as much as we could to try to locate the other two graves.  Jerry took pictures of the portion of coping they had found, and then they covered it over.  It’s on the record now and in my files. We only know that Anna Elisabeth Dankbar, mother of Johann Heinrich Schuenemann, and the child of Johann and his wife Maria Catherine Greitenevert who died very young, are there and that they rest in peace.  So says the church records.