I Remember This Family

08/15/09
I found this picture which obviously had been stashed away with many others and I thought some of you would like to see what was going on with the extended family in the early 1920s.  The reason I know the approximate date is because the youngster sitting in the front is Henry Schueneman Jr.  He was always called Jr. by us but later on as an adult after his father died he became Hank.  I’m not in the picture and neither is Grandma Minnie because I think she was baby-sitting with me and maybe Jane.  Hank was born in 1918 and I was born in 1919.  Besides that, starting on the left is Aunt Jo, grandma’s sister (really my great aunt) who looks like she is holding George Washington Schueneman, born in 1920 on Washington’s birthday, and who is Hank’s brother. That’s how George got his middle name.  Looking at these two and with grandma’s absence is how I arrived at the approximate date.  I’m sure my mother was taking the picture because I remember she had a Kodak box camera and took lots of pictures. 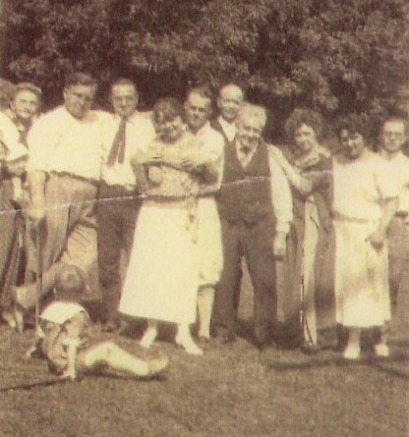 Continuing on the left is Leo Schueneman holding a golf club.  Leo was the most successful child of Grandma Minnie and Grandpa Schueneman but unfortunately died at the age of 47 of kidney trouble
Next to Leo is the father of the two boys, Leo’s brother Henry.  I don’t think Henry played golf.  Dad roomed with Aunt Jo when he left Flora for Chicago. That’s how he met Elvera, my mother.
The smiling lady is Aunt Helen, Leo’s wife.  She was a beauty and lived to be 82.
Now the man in the knickers with his arms around Aunt Helen is my father.  I surmise that he and Uncle Leo had played golf together that day because Dad had on his golf knickers.  He was a Romeo who liked the ladies and it’s obvious he liked Aunt Helen.
Behind Dad is Grandpa and that’s why I think Grandma was baby-sitting, otherwise she would have been in the picture also.
The tousled old man is great uncle Charlie Kuhnert, Grandma and Aunt Jo’s brother.  From what I remember he was an ineffectual old man who lived with Aunt Jo at the McHenry House, the place that Aunt Jo and her husband once owned before her husband died.
Aunt Florence, the mother of Hank and George, has her hand on Uncle Charlie’s shoulder.  Aunt Florence was lovingly called the Irisher because she was so much fun.
The lady next to her is Aunt Lil, Uncle Charlie’s wife.  I didn’t know her very well because she died in 1940 and we didn’t see too much of her. Lastly Uncle Charlie, mother’s brother.  He was a reclusive man, not nearly as colorful as Uncle Henry or Uncle Leo.  But they look like a very happy family to me.